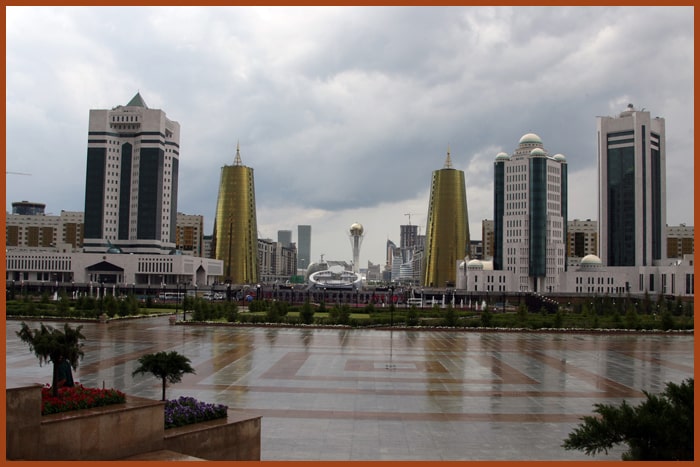 Day 1: Almaty
We are glad to welcome you in the fascinating tour to Kazakhstan. You will explore the sights that are the have a significant meaning. You will visit the famous Green Bazaar the famous place even among locals a where you can find many interesting things. You will be able to test your skills of bargain here.  Then is the one of the oldest park of the city that is known as Panfilov Park, where you can witness Zenkov Cathedral. In course of the tour you will visit memorable sight of the Kazakh people that was made in honor for fighters who died for freedom and independence of the country, the Memorial of Glory and Eternal Flame. Next destination of the tour is the Medeo gorge, well known due to the highest mountain skating rink in the world and the dam. It protects the city from mudflows Kok-Tobe hill will show you the tallest TV tower in the world as well as the picturesque winding mountain road. The tour ends with the short ride from the top of the hill to the center of the city by the famous Almaty cableway. Nights is in the hotel.

Day 2: Almaty - Charyn Canyon - Almaty
Today you will have a travel to the fascinating place that is known as Charyn Canyon.  During the tour you will have a break to have an excursion in the local museum of traditional decorative and applied arts and crafts. The Charyn Canyon you will meet you by its magnificent panorama view and the route that leads to the bottom. Here you will walk among Castles Valley made of bizarre shapes. The road will lead you to the fresh oasis on the bank of icy cold Charyn river. Moreover you will witness the eco-park with several yurts (traditional dwellings) and a small open air café that works only in the summer time. After it you will head back to see another mesmerizing panoramic view. Transfer to the hotel.

Day 3: Almaty - Issyk - Nur-Sultan
The destination for today is Issyk Gorge of Trans-Ili Alatau that lies along the Kuldja tract. You will be witness the road where many centuries ago the route for trade caravans passed. During the way you will have an opportunity to learn more about Saka period and the burial mounds of the famous "Golden Man". Nowadays he is the state symbol of the Republic of Kazakhstan. On the way you will visit the State Historical and Cultural Museum-Reserve "ISSYK. By having excursion you will explore history and culture of the Saka period, including a copy of Golden Man and golden items, ancient ceramics, weapon, elements of horse equipment, as well as the model of Saka burial mound. After it you will drive to the place the altitude of which is 1756. Here you will enjoy the beauty of mountain lake Issyk, located in the valley with the same name. This alpine lake will mesmerize you by its surface that possesses very deep and beautiful color.  In the tour you will listen to the details of the natural disaster of 1963. Then you will have a flight to Nur Sultan. Overnight is in the hotel.

Day 4: Nur-Sultan
In course of the guided tour you will see not only modern part of Nur Sultan but also historical center. At first you will see the Constitution Square that is well known due to the announced of the president of Kazakhstan N.A.Nazarbayev to transfer the capital of the country from Almaty to Astana (now Nur-Sultan). Then is the excursion in the Museum of the First President of the Republic of Kazakhstan* with the Golden man. During the tour you will visit historical center of the city as well as its modern part such as the largest shopping center Khan Shatyr. Durinthe travel you will enjoy the breathtaking view from Astana-Baiterek monument that you are going to reach with the help of elevator. After crossing Ishym river you ill head on to the Kazakh Eli Square. you will visit the exceptional project that is known as the Palace of Peace and Reconciliation as well as the Khazret Sultan mosque. In addition you will have an opportunity to have an excursion in the National Museum of History of Kazakhstan*. This museum will show you the far-reaching plans of the development of Nur-Sultan as well as its historical background. The tour in this place will show you the pride of modern Kazakhstan. Enjoy the beauty in breathtaking tours of Kazakhstan. Night is in the hotel.

Day 5: Nur-Sultan - Borovoe - Nur-Sultan
Full day tour to Burabai National park (Borovoe).The territory of this significant site is the 85000 hectares of Kokshetau elevation. Here you will enjoy only the pristine beauty of the nature. During the tour you will know about 14 lakes the surface of which more than 1 sq.km, and a large number of small lakes. You will be able to visit the Khan's pass and see Burabay and Zheke-Batyr mountains. The Abylaykhan Valley will show you the breathtaking views of Ush-kyz, Ok-Zhetpes rocks and Kokshetau mountain. The legend depicts history and identity of the Kazakh people. Then you will have 30 minutes to reach the top of the Bolektau mountain. The top of this mountain will show you the great view of the Borovoe lake and its surroundings opens, as well as of Zhumbaktas rock. Tranfer to Nur-Sultan and the hotel.